Mark had 22 hours of lessons previously. He contacted us on 5th April and wanted his licence by Mid of April. Mark worked full time and could only do weekends and evenings lessons. We allocated Sayeed for his course and first lesson was booked for 08/4. Car carcaptain booked his driving test for 19th April, and after 14 hours completed, MARK PASSED HIS FIRST TEST WITH CARCAPTAIN !!! 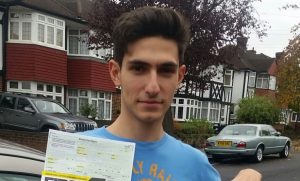 The Young Alex was so determinate to get his licence, He did some driving with his sister and called Carcaptain to book an intensive course. We allocated him to Sayeed and arranged the course around his requirementss. Alex was unsuccessful on his first test but he did not give up! We rebooked his test after 10 days and Alex passed with only 1 minor. Congratulations Alex 🙂

Sasha Leigh-Ann - London
I passed my Driving Test the first time around with Carcaptain intensive driving courses school London (Fast Track condensed and crash driving courses) Eloise - London
I was so impressed with Carcaptain I have already passed your name on to people. The best was I passed my driving test first time. [divider] More Testimonials →