On 23 March 2020 the UK Government called for a blanket shutdown and restrictions on movement.  the full speech by the Prime Minister on 23 March can be read here: https://www.gov.uk/government/speeches/pm-address-to-the-nation-on-coronavirus-23-march-2020

At that time the driving industry came to a halt and the DVSA cancelled all driving tests until further notice. A request in the preceding days was put out that all driving tuition be terminated.

Carcaptain in the succeeding week shut its books, Furloughed its Staff and sent everyone home. 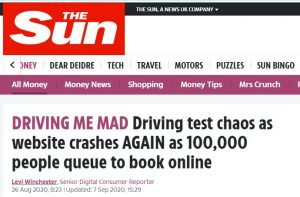 Carcaptain relies heavily on the DVSA booking system. For Carcaptain to be able to support its students and effectively book courses it needs to have access to the DVSA theory and driving test booking services.

The government officially allowed driving tuition to commence on 4 July 2020. However, even though the DVSA has been making promises about opening up the booking system, its functionality is almost non-existent.

When the DVSA cancelled the tests on their system, on or around 23 March, this amounted to three or four months of tests that had already been booked on the system countrywide. Further, although they were very limited critical worker tests, no general public tests were booked until after 4 July. That gives a further  4 months of driving test backlogs. In essence, if you add the three months of tests cancelled to the four months of tests during the lockdown period, it means that the DVSA, as we stand, is approximately seven months behind with their testing.

Since 4 July the DVSA test booking service has been in dire straits. One of the main reasons for this is that the number of available examiners (not self-isolating) is extremely limited and there have been issues with the unions allowing the examiners to go back to work.

At the end of August, the DVSA announced that they would make available 375,000 tests from 14 September to 1 January. If one calculates the number of days over that period as well as the number of test centres (370) this only amounts to approximately 16 driving tests per test centre per day.

How will this cater for 7 months of backlog?

There are approximately 370 Driving Test Centres in the UK.

In an article by Insurance Revolution, it says that around 1.6 Million driving tests are sat every year.

Direct Quote "In Great Britain, around 1.6 million sit for the driving test every year. The pass rate for practical test is 43% while it is 51.6% for theory test. Learners find it easier to score in the theory test as it does not really challenge them on road. Most of the students fail in practical test out of nervousness and panic."

For us to be able to open up again and maintain the viability of the company the DVSA test booking services need to return or resemble some form of normality and substantially more driving tests need to be made available.

When the DVSA functionality and driving test availability returns we will send out a blanket email to all our clients and instructors and give a clear date of when the company can come out of hibernation.

From the Wakefield Express: